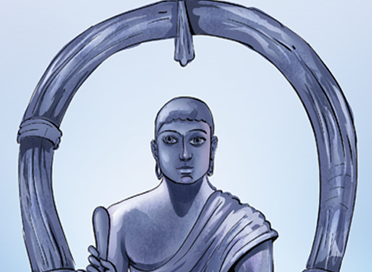 Ilango Adigal was a Jain monk, a Chera prince, and a poet. Legend has it that when he was born, an astrologer prophesied that he would become king. But since his elder brother was alive, Ilango chose to become a monk instead, removing himself from the line of succession. Silappadikaram is estimated to have been written in the 5th or 6th Century, but it is set some centuries earlier. Ilango Adigal describes a rich and cosmopolitan culture, where people from many different backgrounds – Greeks, Arabs and Tamil people – mingle, living and trading in the cities of Poompuhar and Madurai. He talks about a great flowering of the arts, of music and literature, which people from all sections of society could enjoy and contribute to. Much of our modern understanding of the way ancient Tamil cities were built, organised, and governed can be traced back to Ilango’s work and to other literature from the period.

Unlike the Sanskrit epics, the Ramayana and the Mahabharata, Ilango Adigal’s Silappadikaram is not the story of royalty, or of gods, but the story of ordinary people and their struggles. The protagonist, Kannagi, is in every way the equal of the king and queen, and even their moral superior, since they fail to provide justice.

Amar Chitra Katha’s take on Kannagi is available on the ACK Comics app and on all major e-tailers like Amazon, Flipkart and others.