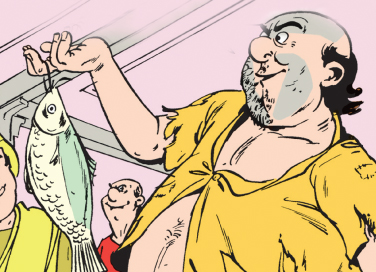 Gopal And The Hilsa Fish

By Mansee Jain and Krithika Nair

In the kingdom of Krishnanagar in Bengal, there once lived a king named Krishna Chandra. Among his courtiers, his favourite was Gopal, the jester. Gopal’s wit would often come to the king’s rescue when he was in sticky situations. The jester’s guidance was quite valuable to the king.

Once, it was the season of Hilsa fish in Krishnanagar, and nobody could stop talking about it. The fishermen only caught Hilsa fish, for the fishmongers wanted nothing else. Why? Because the people would not buy anything other than Hilsa these days. The Hilsa fever spared no one, it gripped everyone in Krishnanagar right from the householder to the courtiers!

For a few days, the king politely indulged all the talk about the fish but sometimes, it was intolerable.

“Have you been to the market yet? I heard the price of Hilsa is down today,” said a courtier.

“I did! You wouldn’t believe how much I got it for,” the other one replied.

A third courtier chimed in. “He’s right. I was there early, got the biggest one.” Then, turning to the king, he said, “Your Majesty, you should have seen the Hilsa I bought. It was this big!” while gesturing with his hands.

The king could not stand this obsession anymore.

“Enough! Not another word about Hilsa. What are you, courtiers or fishermen?” he angrily roared.

The court fell silent. They had no intention of angering the king, they were just discussing something that was the talk of the town. Realising that his frustration got the best of him, the king calmed down.

“I’m sorry. I lost my temper. It’s just that ever since the Hilsa season has begun, no one has talked about anything else. Nobody can stop anyone from talking about Hilsa. I don’t think even Gopal could do it!” he said.

“Oh, I think I could, Your Majesty,” Gopal said with a mischievous smile.

The king huffed. “If that is so, then let me see you buy a huge Hilsa and bring it to the palace without a single soul asking you about it.”

Gopal accepted the king’s challenge and began to plan his victory.

A few days later, Gopal’s wife walked into an interesting scene. Gopal’s usually clean-shaven face was only shaved on one side. He was busy smearing ash on his scalp and cheeks when she let her curiosity get the better of her.

“Why are you only half-shaven? Why are you smearing ash on your face? What’s the matter with you?” she questioned.

“Didn’t I tell you? I’m dressing up to buy Hilsa,” he casually replied.

Then, he proceeded to pull out his oldest, most torn pair of kurta pyjamas. His wife was horrified.

“You can’t possibly go out in those disgraceful rags! What are you up to?” she asked.

When Gopal reached the market to buy fish, all eyes were on him but not a single one dared to speak to him.  Not even the fishmonger that sold him the Hilsa said a word, handing the fish over while quietly gaping at him. Fish in hand, he began walking towards the palace. On the way, he heard many whispers.

“Look at that man! Isn’t he funny-looking?”

Gopal smiled inwardly at all this attention.

When he reached the palace gates, the guards frowned at him.

The guards were annoyed. “You can’t see the king. Get away from here!”

At this, Gopal began to sing and dance loudly at the gates, creating a ruckus. Even the courtiers began to notice and talk about the crazy man demanding to see the king.

The king, too, heard the commotion and summoned a guard to bring him in. When he appeared, the king and the courtiers were astonished.

“Has he gone crazy?”

The king waved at his courtiers to silence them.

“All right, all right. Out with it, Gopal. Why are you dressed in this ridiculous fashion?”

“Your Majesty, please look at me carefully!”

“Look at you? Yes, that’s what we are asking about. What’s all this?”

Gopal then dramatically held up the fish he bought.

“Strangely enough, nobody seems to be interested in the Hilsa fish today! I walked past so many people on my way from the market to the palace and now in your court. Yet, not one word about Hilsa was spoken!”

The king then remembered the challenge he’d thrown at Gopal and burst out laughing.

“Hahaha! Congratulations, Gopal. You have achieved the impossible once again!” the king said in his praise.

Read more stories of Gopal in our title Gopal the Jester. Now available on the ACK Comics App, Kindle, Flipkart, and other major e-tailers. 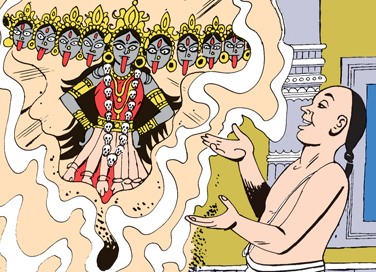 Raman of Tenali Is Blessed By The Goddess

Raman of Tenali was so witty that he even charmed the Goddess Kali to bless him with abundance. 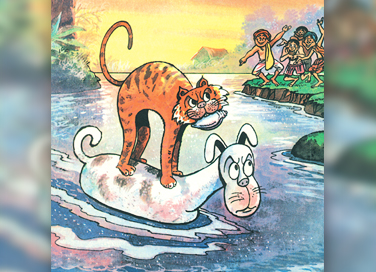 A poor man gets a magical conch that is able to supply him with an infinite quantity of food but the conch gets lost. 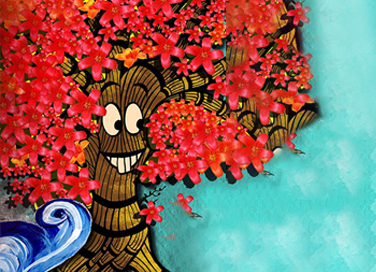 The Story of the Silk Cotton Tree

It is said Bheesma told this story to Yudhishthira to teach him about humility.