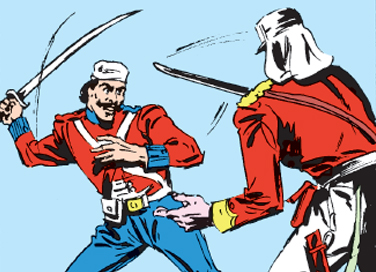 The First War of Indian Independence

By Srinidhi Murthy and Vijita Mukherjee

The British historians may call it ‘The Sepoy Mutiny’ or ‘The Revolt of 1857’ or by any other name, but the uprising of 1857 will always be the First War of Independence in India. Even though it was unsuccessful, it heralded the struggle for freedom that continued for the next ninety years and ultimately led to the freedom of India.

The First War of Indian Independence started as a result of various actions of the ruling East India Company. They recruited Indian soldiers in their army and there were three lakh Indian sepoys in the army to fifty thousand Britishers. The first spark for the rebellion came in the form of the Vellore Mutiny in 1806. Both Hindu and Muslim Sepoys resented the new uniform regulations imposed by the Company, in spite of earlier assurances to the contrary. These regulations prohibited the soldiers from wearing any religious marks on their foreheads and all of them were required to trim their beards and moustaches. Two soldiers who protested were first punished and then discharged from the army. The rebels captured the Vellore Fort and killed two hundred British troops. They were eventually subdued by the cavalry from Arcot. But this voice that was raised against the British rule, echoed through the land and was significant in paving the way for the stronger and more defiant revolt in 1857.

Even before the introduction of the Enfield rifle, which served as an immediate cause for the revolt, there was tension and discomfort among the Indians towards the British rule. There were many so-called ‘reforms’ introduced by the British in the taxation and revenue system that affected the people adversely. The expansion of the British in India had led to the propagation of many other unjust policies too. Many zamindars who lost their lands and power also joined the rebels and fought against the British. In addition to these political and economic causes, racial discrimination and the interference of the British in the religious matters of Indians were believed to be the other major cause of the war. Indians also feared a forced conversion to Christianity.

The introduction of the Enfield Pattern rifle in 1853 was the proverbial straw that broke the back of Indian restraint. Rumours circulated that the cartridges for the new rifles were greased with beef and pork that was a taboo for both Hindu and Muslim sepoys in the army of the East India Company. The Company was quick to contradict this rumour so that the unrest could be quelled. It issued a notice that the cartridges provided were free from grease and made modifications that the cartridge was to be now torn with the hands and not bitten. This, however, backfired as many sepoys were now convinced about the authenticity of the rumours and the justification of their fears.

Mangal Pandey, of the 34th Bengal Native Infantry, is among the most recognised figures of the first war of independence. After the information about the Enfield rifle reached Barrackpore, he declared that he would rebel against the new rules and other atrocities of the Company. On 29 March 1857, this 29-year-old fired at Sergeant-Major James Hewson. Later Mangal Pandey was hanged to death, and all the soldiers of the 34th BNI were disbanded and removed from employment. This action spread the wave of rebellion rapidly across other parts of the country.

Seize of Delhi and Meerut

On May 10, 1857, the revolt broke in Meerut when eighty-five members of the 3rd Bengal Light Cavalry were released from prison by their comrades. The soldiers destroyed the military station and killed any Europeans they could find. Following the outbreak at Meerut, many more uprisings occurred across northern and central India. The rebels moved quickly and seized Delhi next. The Mughal ruler, Bahadur Shah Zafar, was declared as the Emperor of Hindustan.

The East India Company acted swiftly and ruthlessly to control the rebellion. With help from reinforcements, Kanpur was retaken by the British in the middle of July of 1857, and Delhi by the end of September.

The death and sacrifice of these martyrs did not go in vain and India finally gained independence in 1947.

Read the full story of Mangal Pandey in our title Mangal Pandey, now available on the ACK Comics App, Kindle, Amazon, and other major e-tailers. 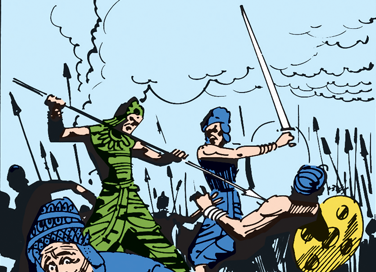 The Kalinga War was a turning point in the life of Emperor Ashoka of the Mauryan Dynasty. 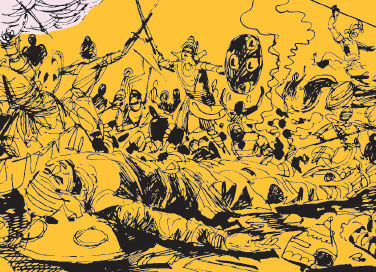 The Downfall Of The Nandas

The Nandas were one of India's most prosperous dynasties, done in by arrogance and greed.