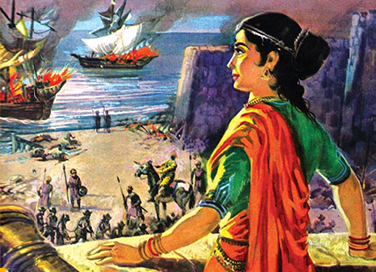 Rani Abbakka Chowta belonged to the Chowta dynasty who ruled over parts of coastal Karnataka. She was popular as Abhaya Rani for her fierce and feisty nature, her decisions and actions ultimately paving the way for the Indian freedom movement. Rani Abbakka was one of the earliest freedom fighters who rebelled against foreign invaders and colonialism. Determined to avenge the defeat of her mother at the hands of Portuguese, she strived hard to drive the Portuguese completely out of Mangalore. Ultimately fulfilling her dream of a free kingdom, she won the respect of her people and is held in high regard and cherished in her hometown of Ullal even today.

RANI ABBAKKA WASN’T SCARED OF ANYONE

When Rani Abbakka was crowned the queen of Ullal, she decided she would completely stop paying the Portuguese the tribute that all the local rulers paid them. In 1555, a Portuguese envoy was sent to Rani Abbakka to remind her to pay up. Abbakka firmly refused to bow to their demands. The furious Portuguese army planned to capture Ullal at once. The Portuguese had built a fort in Mangalore, which gave them the military advantage against Ullal. However, inspired by their queen, the soldiers of Ullal fought bravely in the battle and ultimately captured the Mangalore fort from the Portuguese. The Portuguese ended up surrendering to the fearless soldiers and beating a hasty retreat.

In those times, the Portuguese suppressed any attempts of the rulers to have direct trade with other foreign countries. Rani Abbakka was determined to trade on her own terms for the benefit of her own people, not according to the rules set by the Portuguese. This spark of rebellion against colonialism coming from a queen not only stunned the Portuguese but also some of her own feeble ministers.

Rani Abbakka didn’t have a happy marriage. Her husband, the king of Bangadi, Veera Narasimha, had tried to convince her to not defy the Portuguese. He also wanted their daughter to get married to his nephew, a political alliance that would cement the relationship between Ullal and Bangadi further. Abbakka was completely against this marriage and wanted her daughter to marry a worthy husband. When her husband tried to kidnap their daughter and force her into this alliance, Abbaka rescued her and arranged her marriage to a noble prince. Enraged by her actions, her husband joined hands with the Portuguese to seek revenge for his humiliation. However, it did not matter to the principled queen; Rani Abbakka believed in her decisions and stood by them even though it meant going against her husband.

SHE DID NOT DISCRIMINATE ON THE BASIS OF RELIGION

Though Rani Abbakka followed the path of Jainism, her administration and army consisted of people from all sects and castes, including Hindus, and Muslims. Interestingly, during her rule, even men belonging to the Beary community served as seamen in her naval force. She forged alliances with the Zamorin of Calicut to strengthen her rule. When the Portuguese managed to capture the city of Ullal in 1557, she did not think twice about taking refuge in a mosque. That very same night, she gathered around two hundred of her soldiers and retaliated against the Portuguese. In the battle that ensued, Abbakka Rani won her kingdom back.

Rani Abbakka was considered the biggest threat for the Portuguese during her time and was one of the earliest torchbearers of the Indian freedom movement. Hail the feisty queen who broke all barriers and crushed the Portuguese power in India.

Read the complete life story of Rani Abbakka on the ACK Comics app, Kindle, and other major platforms.

Rana Sanga was the king of Mewar who is accredited for reuniting several Rajput clans and creating a stalwart Rajput association.

The Mughal emperor was a patron of fine arts as well as culinary arts!