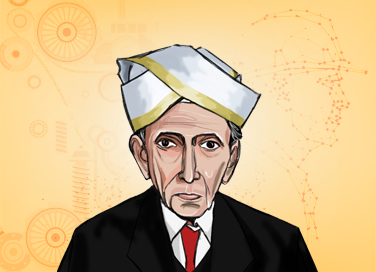 Known as ‘The Father of Engineering’, Sir Mokshagundam Visvesvaraya left behind a legacy that fast-tracked India’s technological and infrastructural transition, paving the path for a modernised India through sheer perseverance and determination. It is in the celebration of his legacy that India observes September 15th as National Engineer’s Day.

Sir Mokshagundam Visvesvaraya, fondly called Sir MV, was born to a poor Brahmin household on September 15th, 1860, in Muddenahalli near modern-day Mysore. It was believed that his father died when Sir MV was barely 15 years old. From then on, his journey in completing his school and college education was one that was filled with endless obstacles and hardships. He acquired a B.A degree from Central College in Bangalore. He went on to earn a scholarship for a civil engineering course from the College of Science in Pune which he completed as the valedictorian. Sir Visvesvaraya’s dedication towards his education was so strong that he would often study under the light of streetlamps late at night to catch up with his portions. During his time in college, he made a small sum of money by tutoring children after classes while still managing to top his university! He led a constant balancing act between earning for his family and trying to pursue his dreams in the field of engineering.

Soon, he was hired by the Public Works Department for the Government of Bombay where he began to develop a keen interest in water irrigation systems, drainage and water supply. Early in his tenure, he even built a structure he dubbed the ‘syphon’; it could redirect water from the Panjra river into the nearby drought-stricken village of Datari. He was deeply passionate about the water conservation system, and his ideas and thoughts were far ahead of the times that they lived in. They helped bring modern irrigation and conservation systems to developing India.

It is believed that, while Sir MV was working on his syphon project in Datari, there was a night of heavy rainfall that caused the river to breach its banks and overflow. Sir. Visvesvaraya took shelter with some locals in the vicinity for a couple of days, but on the third day, he yearned to get back to work. The man apparently swam back across the river with the help of the local workers! It’s safe to say that he was willing to go to any extent for the passion he had for his work!

Armed with immense experience and ideas aplenty, he was appointed as the Diwan of Mysore in 1909 under the post of a Chief Engineer. His instincts told him to take on larger infrastructure and education projects to ramp up development in Mysore, which the Government gladly agreed to. What followed was a massive transformation that revolutionized the state of Mysore forever.

His most significant project during this tenure was the construction of the famous Krishna Raja Sagara Dam, which is still regarded as an engineering marvel and attracts hordes of tourists every day. Not only was its design par excellence, but it also served many purposes for the people of Mysore and the neighbouring regions. It supplied power to the Kolar Gold Mines, it led through vast expanses of farmlands, providing ample irrigation to regions that did not receive enough rainfall, and it also put Mysore on the map as the location for the largest dam to be built in India at the time!

Sir M. Visvesvaraya’s vision was one that went above and beyond. He desired to leave behind a legacy that the rest of the country and the future generations could constantly resonate with. He constantly visited large scale factories and industries to review their work and share his thoughts and ideas with them. He realized the worth of good education and demanded that it be free to all, irrespective of their social or economic strata. This is why he made immense contributions in the field of academia. During his tenure as the Diwan of Mysore between the years 1912-1918, he almost tripled the number of schools and colleges, from 4568 educational institutions to 11,294! He built technical and engineering colleges across the state and introduced compulsory education for all, which became a fundamental right in the Indian constitution. He also set up the first Government Engineering College in Bengaluru, now known as the University Visvesvaraya College of Engineering.

Sir MV had the creative vigour of a child throughout his life and did not shy away from questioning things and coming up with new ways to do things. It was believed that even at the age of 92, he walked to most places and did not take any assistance to do his own work. He was a man with a large heart and made generous donations to the people who worked under him; this was why he was left with only INR 36,000 in his final days. He was awarded the prestigious Bharat Ratna in the year 1955 for lifelong contributions to the field of science and engineering.

In 1962, at the grand old age of 102, he passed away peacefully at his home. His birthday was declared as National Engineers Day from 1968 onwards, and it continues to be celebrated not only in India but also in Sri Lanka and Tanzania! His innovations continue to ignite the minds of aspiring engineers everywhere, and has made engineering a desirable field of study for many Indians to this very day. His was truly a lifetime of sharing, nurturing and demonstrating that one should always push the boundaries of the ordinary!