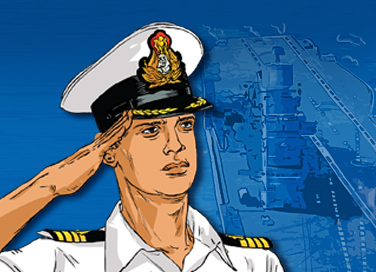 India possesses a glorious maritime heritage that spans over five millennia. The seas, on the three sides of India, have served as natural protection while providing us with a gateway to go out and discover the world and explore. When we did explore, the long coastline and many islands shaped our art, culture, philosophy, economy, ideas, and more, while influencing the world. Take a look at some of the most astonishing facts about the Indian Navy.

One can find numerous mentions of oceans in Indian mythology. Some of the most popular ones include the churning of the ocean milk, Hanuman’s leap to Lanka, and Saraswati’s Vadavagni deposit, among others. So what’s the connection with the Indian Navy? After Independence, the Indian Navy adopted the motto, Śaṃ no Varuṇaḥ. This is an ancient invocation to Lord Varuna from the Upanishads, meaning ‘May the Ocean God be auspicious unto us’. This chant is the motto of the Indian Navy to date.

India is the only nation in the world to have an ocean named after her, the Indian Ocean.

Many places that are now inland were coastal centuries ago. Higher sea levels due to warm weather and long coastline gave rise to numerous trading centres. Lothal, in present-day Gujarat, was one such trading centre. It was an engineering marvel and boasted one of the world’s first tidal docks. It had clever mechanisms to maintain the water-levels despite the changing tides. Precious gemstones, ivory, and shells were exported by the Lothal merchants to places as far as Mesopotamia, present-day the area between the Euphrates and Tigris rivers.

Sea routes not only helped widen the economic horizons but also led to a spread and amalgamation of cultures and traditions. From the temple complex of Angkor Vat in Cambodia to the many versions of Ramayana to the festival of Boita Bandana celebrated in Odisha, this influence is clearly evident.

In fact, around the 2nd century BCE, when the Mauryan Emperor Ashoka was horrified and disturbed after he witnessed the bloodshed of the Kalinga war, he gave up violence. Embarking on a new journey of life embracing Buddhism, he began sending missionaries across the ocean to spread the teaching of Buddha. Many Indian Buddhists settled in various countries for trade also helped this mission. Even today, Buddhism thrives in countries as far as Myanmar, South Korea, Japan, and Thailand.

Read the fascinating naval history of India in our latest release ‘The Naval Journey of India Book I: Millennia of Sea Travel’, now available on the ACK Comics app.