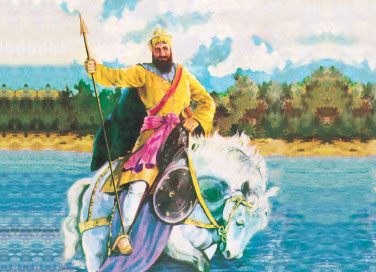 Guru Gobind Singh, the tenth Sikh Guru, helped the Sikhs transform into disciplined volunteers prepared to fight for their faith, by establishing the Khalsa. On the first day of Baisakhi in 1699, he asked his community to assemble and demanded a human head.

While initially there was a stunned silence, soon a young man stood up and offered his head to the Guru. Guru Gobind Singh then led the man into a tent and came out, his sword stained with blood. Once again, he asked for a human head and once again, a young man volunteered. He too went into the tent, after which the Guru came out with fresh blood on his sword. This happened five times.

Guru Gobind then revealed that all five of the volunteers were, in fact, alive and well. He was simply testing the faith of his community. These brave volunteers were named his ‘Panj Pyare’ or ‘The Beloved Five’. Guru Gobind Singh then established a new community – The Khalsa, or the Pure.

The Khalsa was established by the Guru boiling water in an iron vessel and stirring in sugar with a double-edged dagger. This water or ‘Amrit’ was then given to the Panj Pyare, and the Guru anointed them as ‘Singhs’ or lions.

He also laid down the rules of the Khalsa and explained the five emblems of the community. The emblems were –

Guru Gobind Singh declared that the Khalsa are the ‘Pure’ and hence they could never harm the weak or molest a woman and would always regard all men as their brothers. The men in the Khalsa then baptised the Guru, changing his name from Gobind Rai to Gobind Singh, signifying that the Guru is of the Khalsa as much as the Khalsa is of the Guru.

The establishment of the Khalsa was a significant moment in the history of Sikhism and Punjab. Today, Sikhs celebrate Guru Gobind Singh and his teachings for the Khalsa, on Baisakhi every year.

Read more about the life of Guru Gobind in our title Guru Gobind Singh, now available on the ACK Comics app, Kindle, Flipkart, Amazon and other major e-tailers. 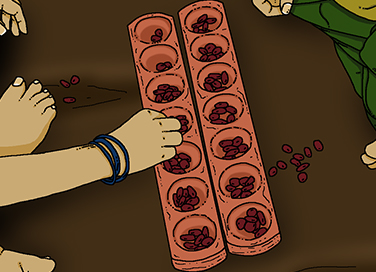 Read about Pallanguli, the ancient Indian game that is said to improve hand eye coordination and mental maths skills.

The production of Channapatna toys is a zero-waste industry.