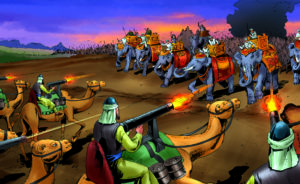 Artwork from Last Days of the Mughal Empire

The Battle of Karnal between Muhammad Shah and Nadir Shah, in 1739, was an ill-matched one. It took Nadir Shah just three hours to defeat the Mughal army. Artist Dilip Kadam, recreated the scene when the gargantuan Mughal army with war elephants and brilliant swordsmen were routed by the Persians who had guns called ‘Zamburaks’ that were mounted and fired from the backs of camels.